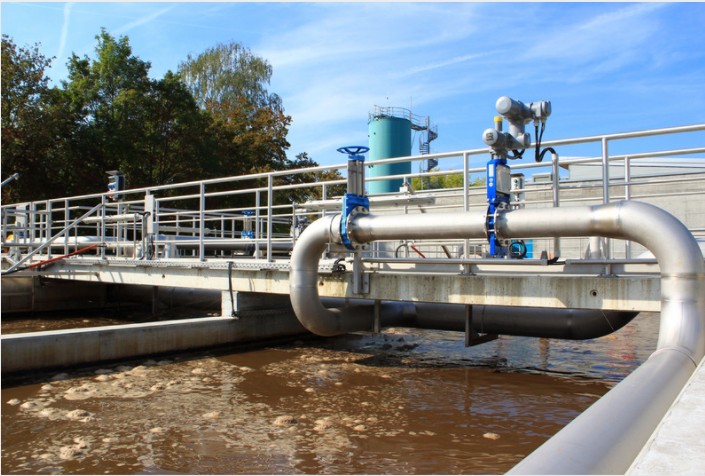 Industrial circulating cooling water systems are often prone to problems such as scaling, corrosion, and slime. Slime problem mainly refers to the heat exchanger and other viscous dirt attached to the inner wall, mainly by bacteria, algae, and other microbial secretion products while adhering to the water suspended impurities and formed. The consequences of biological slime, like scaling, can affect heat transfer, clog the tube, cause local corrosion, and other hazards. Suppose the microorganisms are not controlled and allowed to multiply. In that case, the resulting slime will block the heat exchanger and bring great harm to the system operation. Currently, the most widely used and effective microbial control method for the chemical method, that is, in the circulating cooling water system by adding biocides to control the propagation of microorganisms in the design, water treatment biocides, also known as bactericides and algaecides, sludge strippers or anti-sludge agent, a class of chemicals that can inhibit the growth of bacteria and algae and microorganisms in the water to prevent the formation of microbial slime, causing harm to the system.

Currently, the biocides commonly used in industrial water treatment can be divided into two categories. One is oxidizing biocides, a solid oxidizing biocide, usually a solid oxidizing agent. The pernicious effect of microorganisms in the water is vital. The oxidizing biocides commonly used in circulating cooling water systems are chlorine-containing, peroxides, bromine-containing, and other oxidizing properties. These compounds generally have the advantages of fast sterilization and algae control, high broad-spectrum biocidal effect, low treatment cost, relatively muted impact on environmental pollution, and less resistance to microorganisms. The disadvantage is that it is affected by organic substances and reducing substances in the water, short duration of the agent, the pH of the water is also affected, at the same time, the dispersion penetration and stripping effect is poor; another type of non-oxidizing bactericides, non-oxidizing algaecides are not to kill microorganisms by oxidation, but to poison the unique parts of the organisms, therefore, it is not affected by reducing substances in the water. Non-oxidizing algaecides have a certain persistence of biocidal effect, sediment or slime penetration, stripping effect, less affected by hydrogen sulfide, ammonia, and other reducing substances, less affected by the pH of the water. Still, the treatment cost is relatively high compared to oxidizing algaecides, easy to cause environmental pollution. The microorganisms in the water are susceptible to drug resistance. The following is a classification of its introduction. 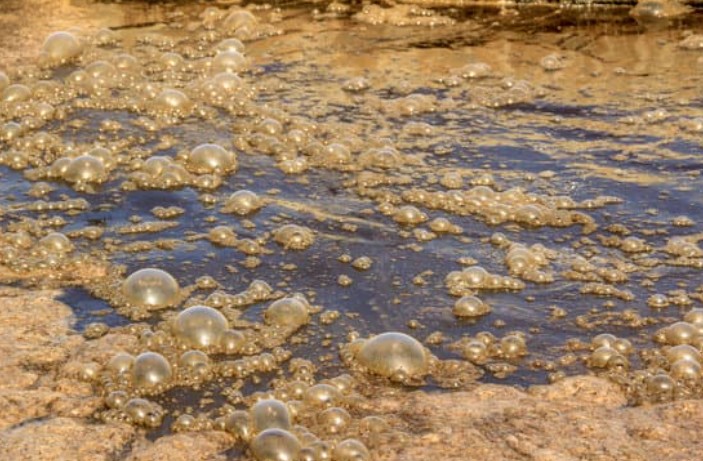 Chlorine-containing compounds have three main bactericidal effects: ① chlorine in the water to generate molecular hypochlorous acid, hypochlorous acid is a tiny neutral molecule, it can diffuse to the surface of negatively charged bacteria, and through the cell wall penetrate to the interior of the bacterium to play an oxidizing role, destroy the bacterial phosphate dehydrogenase, the imbalance of sugar metabolism and cause bacterial death; ② the part of new ecological oxygen, the formation of fresh ecological oxygen by the decomposition of hypochlorous acid, the bacterium will (3) Chlorination, chlorine binds to cell membrane proteins to form nitrogen and chlorine compounds, which interfere with cell metabolism and eventually cause bacterial death. When the pH is more significant than 7.5, HClO will accelerate ionization: NClO = H+ +ClO-, and the bactericidal rate of hypochlorite ClO- is only one-twentieth of that of hypochlorite. The higher the proportion of chlorine added to the water in hypochlorite, the better the bactericidal effect.

Ozone is a potent oxidizing agent and has been widely used in circulating cooling water treatment. Ozone relies on its strong oxidizing properties to kill bacteria and microorganisms by oxidizing enzymes in microorganisms. The disadvantage is that the oxygenation capacity is so strong that almost no corrosion inhibitor and scale inhibitor can match it. It needs to occur on-site, resulting in high costs.

Bromine and bromine compounds are faster than chlorine: the survival rate of bacteria is reduced to 0.0001% within 4 minutes. The corrosion is 2-4 times lower than chlorine, and metal corrosion is 2-4 times higher than bromine at pH 8.2 at the same dose. The sterilization mechanism is similar to liquid chlorine: Br+H2O=HBr+HbrO hypobromous acid HBrO interacts with intracellular proteins, thus destroying the protein structure to achieve sterilization. The activity of hypobromous acid is much higher than hypochlorous acid, which is why bromine fungicides are better than chlorine fungicides.

Peroxyacetic acid, also known as peracetic acid, is one of the more prominent bactericides among all chemical fungicides and is extremely unstable and explosive in pure form. The bactericidal principle of peroxyacetic acid is twofold: 1) it relies on powerful oxidation to inactivate enzymes and cause microbial death; 2) it damages microorganisms by changing cell pH.

Chlorophenols and their derivatives are a class of non-oxidizing algaecides. Their algaecidal ability is enhanced by the introduction of chlorine atoms into the molecular structure of phenols. These compounds are not readily degradable and are toxic to aquatic organisms and mammals, so the pollution problem must be given sufficient attention. Chlorophenols are not suitable for use with cationic agents (e.g., quaternary ammonium salts). Still, when used in combination with certain anionic surfactants, they can significantly reduce the dosage and improve the biocidal effect. The bactericidal mechanism of chlorophenols and their derivatives: Chlorophenols can be adsorbed on the cell wall of microorganisms and then diffuse into the cell structure, generating a colloidal solution in the cell, causing protein precipitation and thus destroying the protein to kill bacteria. Commonly used types include dichlorophenol, pentachlorophenol, sodium pentachlorophenol, etc.

The bactericidal mechanism of quaternary ammonium compounds has the following four points: ① change the permeability of the cell, water into the bacterium swelling and rupture; ② has good surface activity, can be highly aggregated on the surface of the bacterium, affecting the metabolism of bacteria; ③ into the interior of the cell, so that the cell enzymes blunt, protein enzymes can not be produced, so that protein denaturation; ④ inactivate the dehydrogenase, oxidase, and can break down the glucose, glucose, pyruvate, pyruvate, pyruvate, etc. (4) Inactivate dehydrogenase, oxidase, and enzyme systems that break down glucose, ambulate, pyruvate, etc., thus preventing bacterial respiration and glycolysis.

The development of quaternary phosphate salts is a new direction of algaecide research. These compounds have a similar structure to quaternary ammonium salts but with phosphorus cations instead of ammonia cations. It is mainly used in industrial water treatment agents oilfield water treatment, with the advantages of high efficiency, rapid, broad-spectrum, low toxicity to the environment, fish, easy biodegradation and easy to use, etc., the shortcomings are the higher cost, some compounds have low water solubility [4]. Industrial water treatment agents commonly used are tetramethyl phosphonium chloride, tetrahydroxyalkyl phosphonium sulfate, and tetrahydroxyalkyl phosphonium chloride, effective against Gram-negative and Gram-positive bacteria, as well as molds and algae. Quaternary phosphates are new fungicides that have been developed in the last decade, and their structure is similar to that of quaternary amines. The bactericidal mechanism of quaternary phosphates is mainly through the disruption of bacterial respiration and glycolysis or the denaturation of proteins and the destruction of cell membranes and cell wall structures to achieve the bactericidal effect.

Organophosphorus fungicides emerged after the 1960s and were initially used in agriculture to control plant pests and diseases and began to be used in large quantities after the 1980s. According to the chemical structure, there are mainly thiophospholipids, phosphoramidites, etc. Because of their high toxicity, their application has been reduced in recent years [7]. The mechanism of action of organophosphorus bactericides and algaecides: (1) act on the -SH group of triphosphate adenosine hydrolase on the cell membrane, thus changing the permeability of the membrane; (2) affect the activity of methyltransferase in the lecithin synthesis process on the cell membrane, which is manifested as the effect on cell wall synthesis. (3) Inhibition of DNA, RNA and protein biosynthesis, and oxygen uptake. 3.3.7 Organic aldehydes Typical product is glutaraldehyde, glutaraldehyde is almost non-toxic, suitable for a wide range of pH, high-temperature resistance, commercial purity of 15 % and 45 % two, 15 % purity of the dosing amount of 100 mg / L, the primary use is to control the growth of bacteria, mold, and algae in water, glutaraldehyde sterilization effect is speedy, an average of 1 ~ 3 hours to sterilize more than 99%, the higher the temperature, The higher the temperature, the better the sterilization effect, is a special agent to kill sulfate-reducing bacteria, itself can be biodegradable. The disadvantage is that the sterilization time is extended, usually up to 10 hours, and can react with ammonium compounds and lose activity [8]. The sterilization principle of glutaraldehyde has four main points: (1) The aldehyde group reacts with the active groups such as amino, imino, and sulfhydryl groups on proteins to kill microorganisms by destroying the proteins. Glutaraldehyde can interact with peptidoglycan in the cell wall of microorganisms, and the higher the peptidoglycan content, the easier it is for glutaraldehyde to kill microorganisms. (3) Glutaraldehyde also interacts with cytoplasmic components and cell membranes, acting on the outer cell membrane, presumably the lipoprotein and globulin layers. ④Altering cell permeability, disrupting enzyme systems and inhibiting the synthesis of DNA, RNA, and proteins.

Dibromodiazepine propionamide (DBNPA) is a new type of highly effective algaecide and water treatment agent. It has the advantages of high efficiency and broad-spectrum, easy degradation, no residual toxicity, no pollution to the environment, etc. At the same time, it has the functions of multi-effects such as sterilization and algae control, slime removal, and corrosion inhibition [9]. The product has good sterilization performance, does not pollute the environment, and has been widely used in developed countries. Still, little research has been reported on it in China. DBNPA is a broad-spectrum, high-efficiency algaecide that can rapidly penetrate the cell membrane of microorganisms and act on certain protein groups, causing the normal redox of cells to be suspended, thus causing cell death. At the same time, its branches can also selectively brominate or oxidize specific enzyme metabolites of microorganisms, which eventually lead to the end of microorganisms.

The mechanism of action of organic amine fungicides is that the lipophilic group of alkyl amine can dissolve the fat on the surface of the bacteria. The most commonly used products are chlorhexidine. Amines also have an excellent synergistic effect with phenols [10]. Amine salts with high molecular weight are often combined with quaternary ammonium salts to obtain better dispersion.

III. Prospects of bioremediation for the treatment of soil mercury pollution